Hopes and dreams can propel you through the fire; or they can burn you to death.

Until today. Arleen Brennan reappears in Chicago to vie for the last-chance breakthrough role that has eluded her for two decades as an actress. Bobby never left; he’s a gang cop caught in a street war that could derail the city’s upcoming bid to host the Olympics.

When Bobby and Arleen collide, their reunion shocks them to their knees. Together they enter a twisted labyrinth of neighborhood secrets, gangland politics and murderous betrayal that threatens to consume everyone it touches.

As readers and critics discovered in his first novel, Calumet City, Charlie Newton’s Chicago is a landscape as brutal and poignant as any in modern crime fiction—a multi-faceted, shockingly violent labyrinth of gangland politics, political backstabbing, corporate malfeasance, and, possibly, hope. 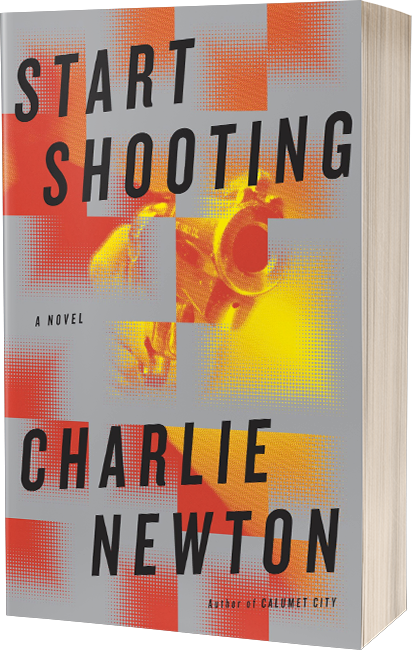 Start Shooting will do for the Windy City what The Wire did for Baltimore and James Ellroy’s novels did for Los Angeles . . . . Newton delivers a thrilling, densely packed novel that makes most Chicago crime thrillers seem tame.
—Kirkus (starred review)
Wonderfully realized characters . . . beyond-frenetic action . . . hypnotic. Newton has created the writerly equivalent of every great Chicago bluesman who ever lived playing together . . . It might be messy, but you wouldn’t want to miss a single note.
—Booklist (starred review)

[A] firecracker crime novel teeming with violence and venality . . . His lit-fuse urgency hits you right in the gut.
—Entertainment Weekly

Blazing. Life in the wrong lane.
—Los Angeles Times
Terrific. The voices reverberate in your ears, and the smell of gunfire lingers long after the last man is down.
—Marilyn Stasio, New York Times Sunday Book Review
Shocking, indelible, and brutal, with moments of strange beauty and desperate tenderness.
—Kevin Nance, Chicago Sun-Times
Newton has given us a frenzied, frenetic, driving, punching, shouting, pinwheel of revelations about life in the wrong lane . . . . I couldn’t put the book down.
—Alan Cheuse, Chicago Tribune
I wasn’t even aware at times of where I was sitting or the fact I was holding a book. I was clinging to a Chicago cop’s hopes and dreams, and hanging on for dear life. That’s what a great book, a great story, will do.
—Jonathan Eig, Printer’s Row
Chicago born Charlie Newton has put his birthright and all his claimed influences (Raymond Chandler, PJ O’Rourke, Hunter Thompson and Pete Dexter) together and come up with a highly charged libretto for a gloriously Chicago grand opera.
—ourmaninboston