Chicago has always been a slaughterhouse.

Awash in partisan rhetoric, facing bankruptcy and a federal takeover of its police department, Chicago is thirty-six hours from imploding into a race war. Canaryville will be the flashpoint—violent, insular, bare-knuckle Irish, and fiercely defensive of what little neighborhood it has left.

As the Southside musters for its massive Irish-only but now-banned St. Patrick’s Day parade, extremist groups descend from all sides. A grisly double-homicide occurs at Canaryville’s eastern border. Within hours, a pub-bomb explodes at the western border. Amid the rage and carnage, a third targeted homicide rocks the neighborhood.

Embattled homicide lieutenant Denny Banahan races to prove the killings are a purge within the Irish mob, not the graffiti-implied threats of another “Red Summer”—Chicago’s horrifying rampage of racial murder and arson in 1919. But the shocking secrets that Denny’s detectives begin to exhume may say otherwise.

Buried in those secrets are Denny’s deep and tragic childhood roots in Canaryville, and his major sins in the violent Black neighborhoods that surround it. The explosive combination will make Denny the one cop who might stop Chicago’s long-predicted descent into Red Summer, or the one who will finally ignite it. 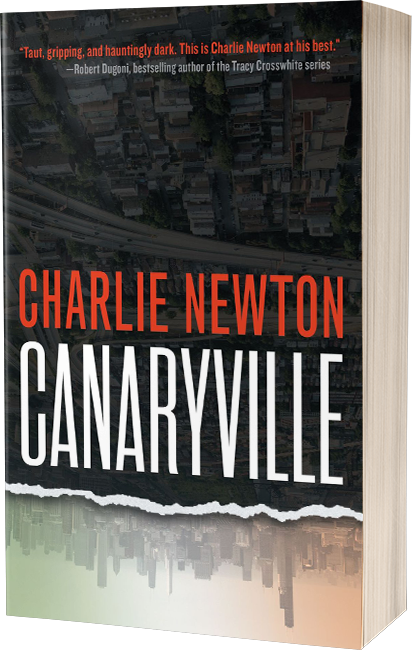 Taut, gripping, and hauntingly dark. This is Charlie Newton at his best.
—Robert Dugoni, bestselling author of the Tracy Crosswhite series

Charlie Newton is one of my favorite writers, and he keeps getting better, which is scary. Canaryville sizzles. It burns with the kind of passion that makes Chicago beautiful and brutal.
—Jonathan Eig, New York Times bestselling author

Charlie Newton’s crime fiction thrillers are like ticking narrative time bombs, exploding with existential brutality and blood-soaked enlightenment when readers least expect it. Canaryville is Newton at his best—unapologetically audacious and always seconds away from a jaw-dropping, skull-crushing detonation.
—Paul Goat Allen

Newton’s willingness to accept racism on its face rather than massage out some of the ugliness in otherwise sympathetic characters breathes fire into every aspect of this story and allows Chicago, or at least a part of it, to become an organism onto itself… (read more)
—Don Evans on NewCity